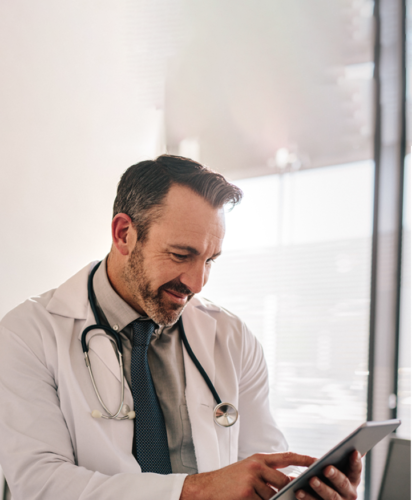 Researchers in France developed a web-based algorithm to help oncologists take action at the first signs of a potential relapse.1 2 Lung cancer patients were asked to rate their symptoms every week using a short online form. The algorithm processed these symptom scores and automatically emailed oncologists if there were signs of a potential relapse. This algorithm, now built into a web and mobile application called Moovcare®, offers significant improvements in overall survival, relapse detection and healthcare costs for patients with lung cancer when compared to standard care.3-5

Routine follow-up care for lung cancer patients commonly involves clinical assessments and imaging at standard intervals, often every 3–6 months. These non-personalised intervals may leave relapsing patients without medical input for weeks between appointments.1 In addition, repeated imaging is costly and may increase patients’ anxiety.2 At least 75% of lung cancer relapses are symptomatic, and these symptoms could be used to improve and personalise follow-up care.4 6

Researchers in France developed a web-based algorithm to detect potential lung cancer relapses based on patient reports.1 2 Lung cancer patients were asked to rate their symptoms (e.g. fatigue, pain or changes in weight) using a short online form every week. The algorithm processed these symptom scores and automatically emailed the patient’s oncologist when scores indicated a potential relapse. This process enabled oncologists to take immediate action (e.g. follow-up calls or imaging tests) at the first signs of a relapse.4

The algorithm was eventually built into a web application called Moovcare® in partnership with Sivan Innovation. Patients can submit weekly symptom reports through Moovcare® on a computer or mobile phone. Moovcare® is currently being used by 22 clinicians across 10 medical centres in France.

What has it achieved?

From the interim analyses at 12 months:4

From the final analyses at 2 years:3

From a study looking at the cost and cost-effectiveness of Moovcare®:5

Following the effectiveness of Moovcare® for lung cancer patients in France, next steps include testing its application in other cancers and expanding to other European countries, Israel and the United States.