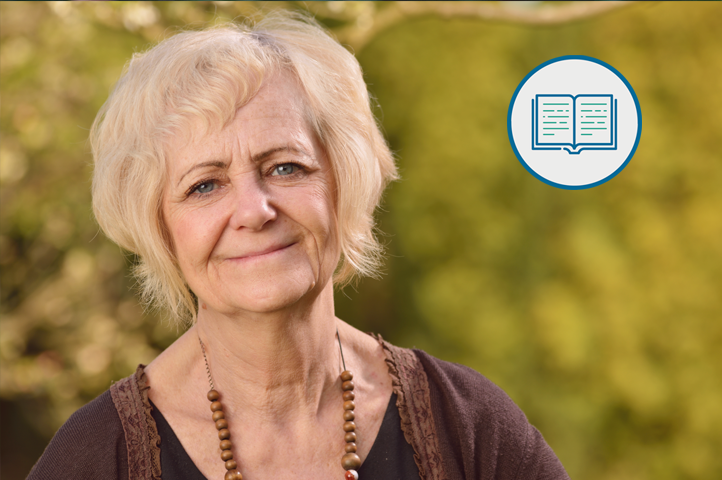 It took about four or five months from my first having symptoms to finding out I had cancer. It began when I felt a lump in my left breast. I knew it could be a sign of cancer, but also that it could be something else entirely. As a precaution, I went to my GP; she reassured me but still recommended a mammogram. She didn’t seem worried.

I have a disability which means I have trouble moving, so my daughter usually drives me around. She had recently been hospitalised at this point, so I waited several months before going for the exam. When I eventually went, I had broken my ribs in a fall so could only have an ultrasound. As soon as I saw the radiologist’s face, I knew something was wrong. She told me that I had to have a biopsy.

‘I was glad to be told right away’

After the biopsy, the radiologist told me to phone her a few days later. When I called, she told me I had cancer and needed to contact my GP. I was glad to be told right away like this, even though it was over the phone and rather direct, because my GP was on leave so I don’t know how long I might have had to wait otherwise. Because I knew it was cancer, my daughter made an appointment for me to see her gynaecologist so I wouldn’t have to wait for my GP to return.

The gynaecologist contacted the director of the breast clinic at the same hospital and, when I went to this appointment, they were both present. I was then put in the hands of a nurse for the coordination of my appointments and, the very same day, I had all the complementary examinations immediately: mammography, ultrasound and so on. They discovered a lesion in the right breast as well, so I had a biopsy for each breast.

I was told that my tumour was hormone-dependent and wouldn’t require chemotherapy, but this was before the results came in so they would not have known. When I later saw the surgeon, she explained everything to me.

The oncologist told me I had a tumour of 4cm on the left breast, and a slightly smaller on the right breast. I wanted to have my left breast removed, not a lumpectomy, but the oncologist decided otherwise. I was not allowed to choose.

I didn’t try to get a second opinion or go somewhere else because this hospital was very welcoming. I felt listened to and completely supported, so I absolutely trusted them. Now, though, the same oncologist is no longer available – the system in that hospital means the oncologist only supports you during treatment, then you have to see the surgeon for follow-up.

I felt misled by some of the healthcare professionals. I asked the radiotherapist whether I would have problems swallowing, and he said no – he told me the side effects would be limited to redness. But I later did have this problem, and another radiotherapist confirmed that it’s very common. I also have pulmonary sequelae due to radiotherapy combined with chemotherapy; I saw two pulmonologists who confirmed this, but my oncologist said it has nothing to do with the treatments. It’s confusing and upsetting to get such mixed messages – it feels like people aren’t being honest with me.

I have problems with my left arm now – the surgeon told me after the surgery that he had damaged some nerves. At the time, he was kind and understanding. But now I feel unsupported – he just tells me to just take painkillers.

I would have preferred that all the follow-up go through the oncologist, because she was the warmest and most human of all the team.

‘My family and friends didn’t want to talk about it’

I couldn’t talk about my cancer with my family or friends because they didn’t want to talk about it. My family did not want to talk to a psychologist, either. I was offered psychological support after the first chemotherapy session; I said I didn’t need it, but now I regret that. I didn’t think I needed it at the time, but I definitely needed it later, after all my treatments were finished. By that point, though, I couldn’t go to see the psychologist because I live far from the hospital and couldn’t afford the journey. I regret not agreeing to see a psychologist when I had the chance.